The Dutch painter Vincent van Gogh is famous for his depictions of irises in the south of France. Right now, those irises are flowering everywhere around Le Fort Pouzols-Minervois!

Vincent van Gogh painted his irises in the last year before this death in 1890. At the Saint Paul-de-Mausole asylum in Saint-Rémy-de-Provence, he started painting irises in the garden within a week of his arrival.

Did you know that Van Gogh originally painted his irises in purple, as they are here today? Sadly, some of the pigments he used have deteriorated over time. That means that his flowers look blue today. Experts from all over the world are debating how to stop further decline in Van Gogh’s works. Their advice is that they should really only be displayed in limited, filtered light – a far cry from the light, open displays of the Van Gogh Museum in Amsterdam.

Future restorations will not simply paint over the blue irises to make them appear purple again. Instead, it is proposed that digital reproductions could be shown alongside Van Gogh’s paintings to give visitors a sense of their original colours.

The courtyard at Le Fort Pouzols-Minervois displays irises in both blue and purple alongside hundreds of other spring bulbs. Elsewhere in and around the village of Pouzols-Minervois, you can see irises growing by the side of the roads and pathways everywhere.

Irises have long been popular in France. In fact, many consider them the national flower of France. The fleur-de-lis or ‘flower of the lily’ was used as a symbol by French royal families for centuries. However, the emblem used looks more like a three-petal lily than an iris. The three petals are said to symbolise the holy trinity. But far from being a lily, it was actually a yellow iris – one of hundreds of varieties of irises – that was represented in the emblem. 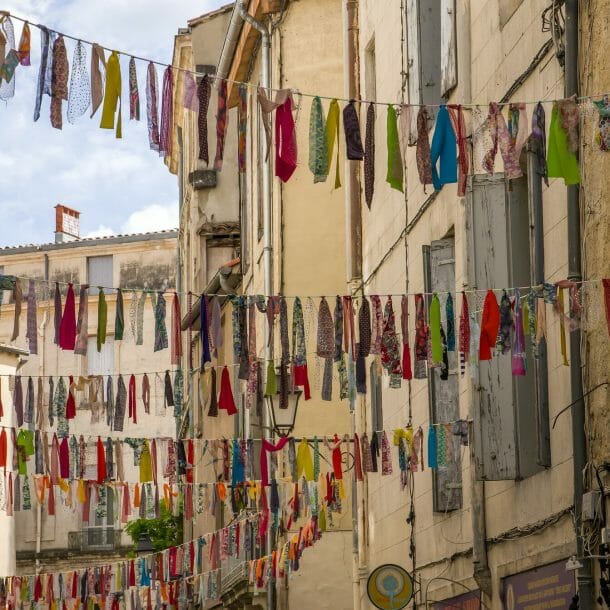